From 1640 to the early 19th century, an estimated 3.2 million enslaved African people were transported by Britain’s vast shipping industry – and Lloyd’s was the global centre for insuring that industry. We are deeply sorry for the Lloyd’s market’s participation in the transatlantic slave trade. It is part of our shared history that caused enormous suffering and continues to have a negative impact on Black and Minority Ethnic communities today.

A journey of reflection

Prompted by the anti-racist activism of Black people and allies following the murder of George Floyd, Lloyd’s is on a journey of research and reflection as we acknowledge our historical connections to slavery, as well as the lack of ethnic representation – particularly at senior levels – that still exists within the Lloyd’s market.

While slavery’s connections to Lloyd’s history have been tacitly acknowledged before, they have never been fully interrogated or accounted for, until now. Our market – the world’s largest insurance and reinsurance market – was started in the 17th century, in Edward Lloyd’s coffee shop, near the banks of the River Thames.

Lloyd’s customers were ship owners and businesspeople, many of whom amassed their fortunes in the same way that Britain enriched itself at the time – through the extractive economics of empire. That empire was powered by Britain’s vast shipping industry. And Lloyd’s was the global centre for insuring shipping.

Not only did the market’s marine insurance consider and underwrite enslaved people as part of a ship’s cargo, much of Lloyd’s business involved commodities of empire - food such as wheat and rice, industrial crops such as cotton or rubber, stimulants such as sugar, tea, coffee and tobacco and ores such as copper and gold - which were also likely to have been produced by enslaved or unfree people.

We are deeply sorry for the Lloyd’s market’s participation in the transatlantic slave trade. It is part of our shared history that caused enormous suffering and continues to have a negative impact on Black and Minority Ethnic communities today.

We have had some honest conversations with our Black and Minority Ethnic colleagues, in both the Corporation and the market, about Lloyd’s history, the trans-Atlantic slave trade and their experiences. The views of those colleagues have been compiled into a video which you can view here, and we are grateful for their insights.

We are also undertaking a research collaboration with Black Beyond Data of Johns Hopkins University, who are independently examining items in our collection which have significant connections to slavery and will contextualise Lloyd’s institutional role. This important work will set these items in the wider context of this shameful period of history. This research will be published as a digital exhibit in Spring 2023, alongside the online catalogue of Lloyd’s Collection.

Dr Alexandre White, who is leading this project at Black Beyond Data, said:

“This project seeks to serve as a critical site from which to consider how to read and witness historical objects produced in the service of slavery in ways that complicate the narratives put forward by their creators. 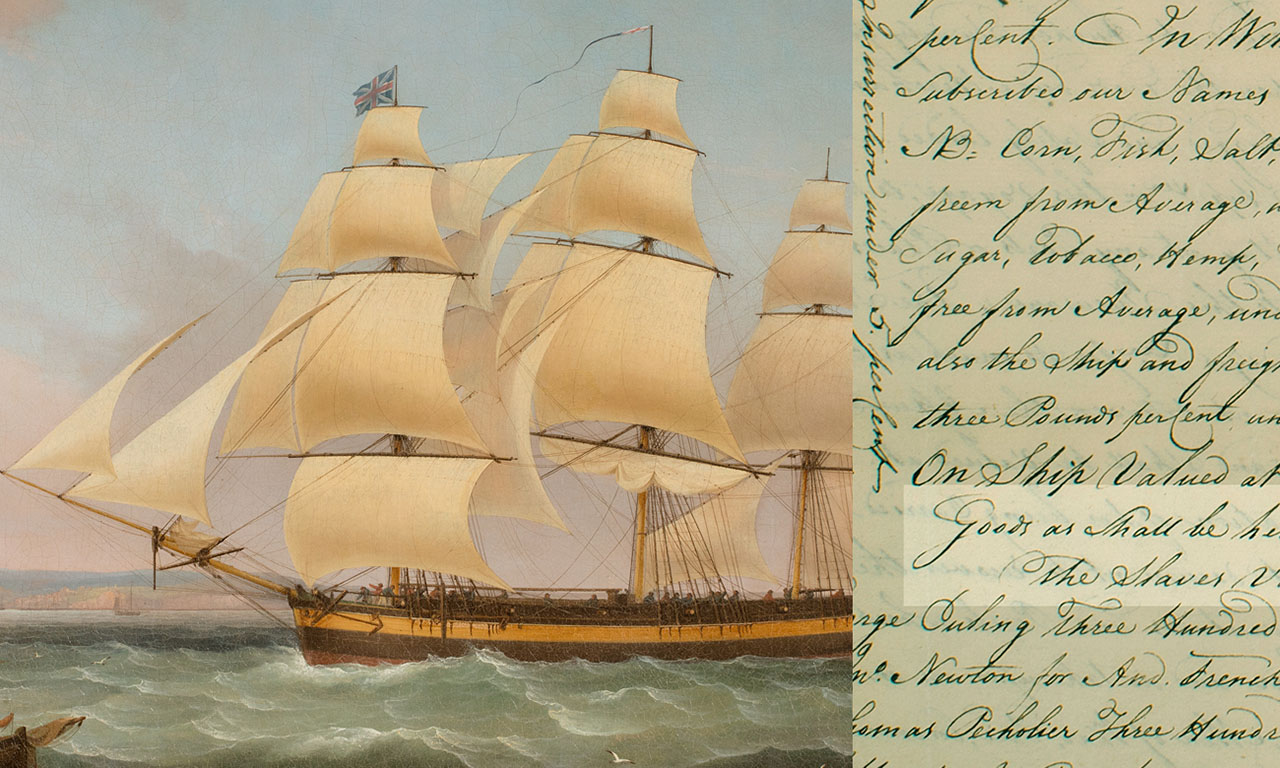 We are grateful for the work of many academics who continue to research this issue. Dr Nicholas Draper has written an article on Lloyd’s, marine insurance and slavery which outlines the key facts on this subject.
Read more 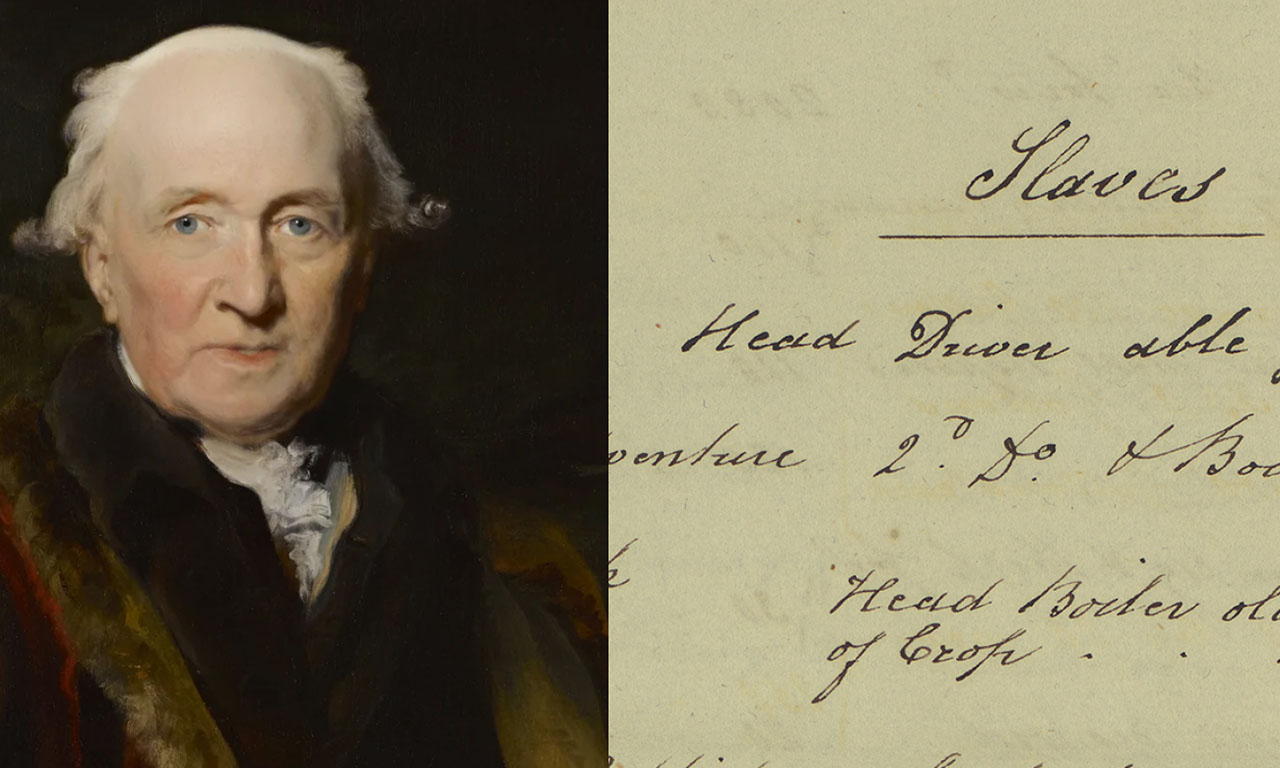 We have set up a Working Party made up of academics, curators and representatives from the Corporation and the market to support us in our investigation of the role of one of our most prominent members of the period, John Julius Angerstein (1735-1823). Angerstein was a beneficiary of slavery from his marine insurance work and was a trustee of estates in Granada which held several hundred enslaved people. Read the findings from our research.
Read more

As we further examine Lloyd’s connections to slavery, we will continue to make our findings public, and will ensure that an honest account of our role in the slave trade is a part of the story we tell about Lloyd’s.

We also recognise that the legacy of slavery continues, evident in the racial inequality that persists to this day.

At Lloyd’s, we want to operate a market in which everyone can fully participate and thrive. One of the ways we intend to do this is through continued investment in programmes to attract, retain and develop Black and Minority Ethnic talent.

An opportunity for progress

As the world’s specialist insurance market for more than 330 years, we often say that Lloyd’s has helped to create a braver world. But our market’s historic participation in the transatlantic slave trade, and our early failings to fully acknowledge this history, were anything but brave.

We continue to approach this work with profound humility, a spirit of openness and real enthusiasm for change. We are listening to and being guided by our Black and Minority Ethnic colleagues, we will be transparent and we will be accountable for the progress we make.

We continue our journey to understand and integrate all parts of our past to reimagine a more just and equitable future for Lloyd’s, and for the world it has insured for centuries. 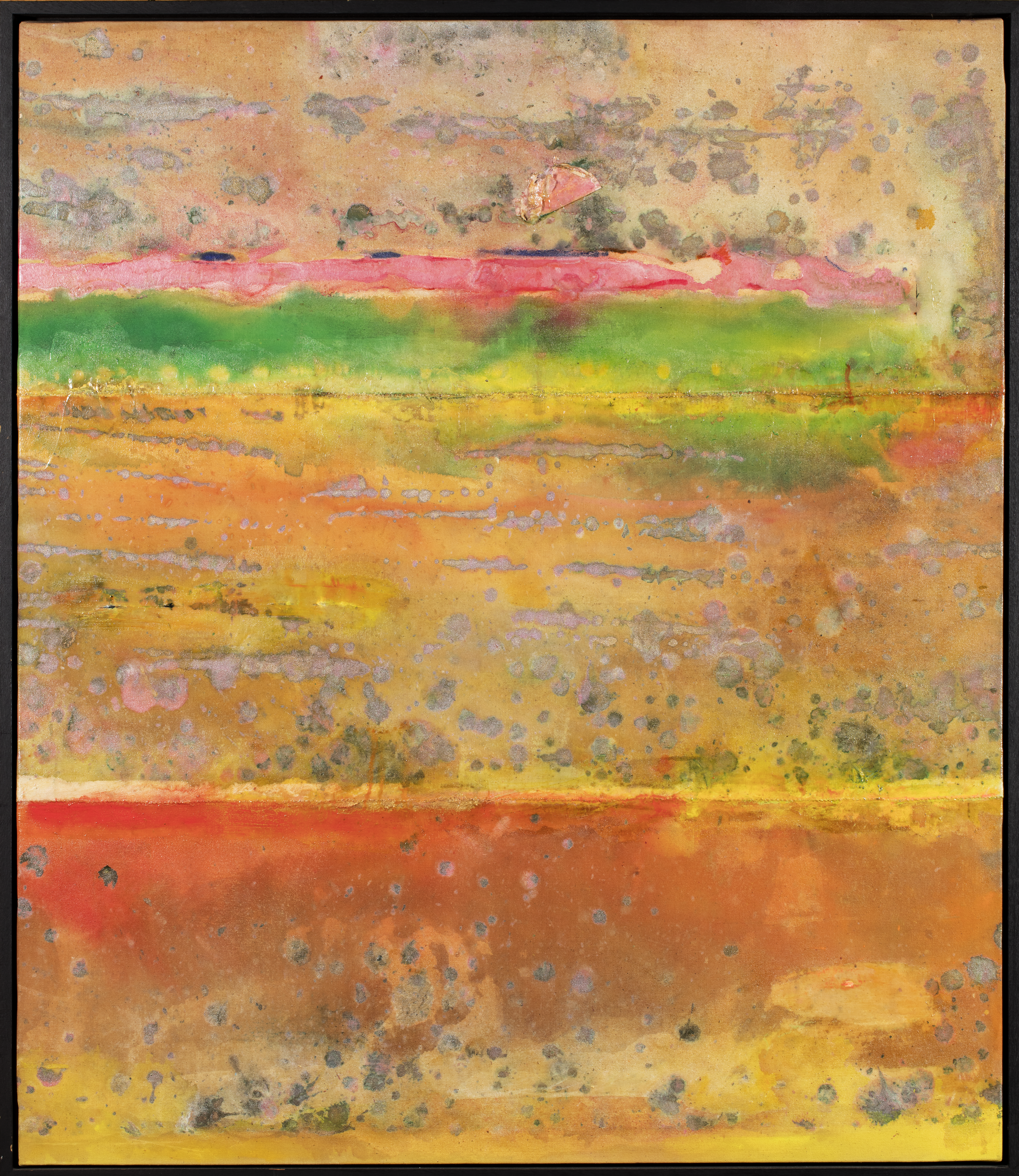 We are prominently displaying Sir Frank Bowling’s work ‘Empire Day Picture’, in the Lloyd’s Building in London, which encapsulates his ancestors journey through enslavement and empire to his own inspiring story of becoming one of the world’s leading painters.

Lloyd’s Corporate Archive is freely accessible to the public. The catalogue of our Corporate Archive is available at the London Metropolitan Archives. Most of the collection dates from 1771, with some deeds dating back to 1585. Please note that the Captains’ Registers are held at London Metropolitan Archives and the rest of the archive is available at the Guildhall Library.