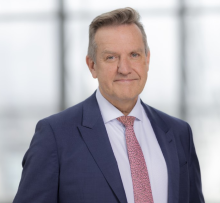 A month after returning to Lloyd’s Joe Dainty, Lloyd’s Market Delivery Director, reflects on his three-year stint working on the Joint Venture with DXC Technology and what brought him back to Lloyd’s. After joining the Corporation in 2015, Joe left Lloyd’s to work in the Joint Venture with DXC Technology in 2019, addressing the complexities of digitalising one of the oldest insurance markets in the world.

“In my time at DXC and previously at Lloyd’s, I have been working towards the regeneration of the central services of the London market. Even while at DXC my role involved working very closely with Lloyd’s, so in that sense I never really left.”

Since returning a month ago I’ve had a strange feeling of both familiarity and difference. Things which have changed since I left and things which have remained almost exactly the same. But it’s nice to come back and see people I last worked with three years ago, it really does feel like coming home as you walk through the turnstiles. However, at the same time Lloyd’s has also moved on since I left, mainly due to the impact of the pandemic. I think I’ve probably noticed this change more than others having been away since before it started.

One of my major challenges in my new role is getting the market ready for the changes they need to make. Explaining to them what Blueprint Two is and what it means for them and articulating to everyone involved in the process what the improvements and benefits of this change process are going to be.

The final part of that challenge is to work with the Lloyd's Market Association (LMA) and with stakeholders across the market, explaining to them what they actually need to do to implement the changes.

The first time a claim or premium goes through the market without being touched by human hands then that will be a great success. We will then start to see the approval of claims going through in hours rather than days.

Some of systems in place in the market haven't actually been touched in 36 years, so one of the things I'm really looking forward to is the day when we can flick off the switch on some of those legacy systems.

In the meantime, we'll be making sure that all the transitional systems are working and supporting all the market participants on a dedicated basis.

"One drawback to the insurance industry is that very often the positive outcomes of your work aren't tangible, so it's great to have something that you made with your own hands, that you can touch."

Get to know Joe

Lockdown was a difficult time for everyone, but it was also a chance to try new things. Using online lessons, I taught myself how to paint with water colours. I found myself painting city scenes and buildings, one of which turned out to be good enough to hang in a local gallery.

I also turned my hand to making wooden tables, often with a strip of coloured translucent resin at the centre.

Beyond my creative pursuits, I also enjoy watching rugby, especially the British and Irish Lions' matches. I also do a bit of cycling and most recently took part in the Lloyd's London-Whitby bike ride.