Sharing risk to move grain during the Ukrainian crisis

The Ukrainian conflict has caused hardship and suffering to millions, from those who were forced to become refugees, to the people who remain in the path of the conflict. However, a subsidiary global food crisis has also been narrowly averted.

"The ‘AsOne’ Ukrainian grain facility is a perfect example of how the Lloyd’s market uniquely brings together skilled teams that are able to mobilise at speed and facilitate a bold solution in a time of crisis."

Ukraine grows 10% of the world’s wheat, and 40% of the World Food Program’s wheat supplies. Much of this is exported to Africa – a region which is already dangerously near the margins on food shortages because of its extreme climate and harsh economics.

When Russia blockaded ships from leaving Ukrainian ports in February 2022, there was a real and immediate risk that the July harvest from the Ukraine would not be able to be shipped to Africa, and that as a result, many millions of people would face famine this year. The UN acted decisively and was eventually able to work with Russia and the Ukraine to broker a deal that would allow cargo ships to bring grain through the contested waters. However, for shipowners to be willing to carry cargos to and from the region, there needed to be an available insurance cover for the cargos. Otherwise the risk was seen to be too high.

Chris McGill, Head of Cargo at Ascot could see the humanitarian need and moved fast to unblock the impasse. He and his team at Ascot understood that London was the only international insurance market that would be able to consider this sort of challenging risk and set out to work with our teams at Lloyd’s to create a new joint facility (brokered by Marsh and with Ascot as lead underwriter) that could offer cover for grain moving in and out of the Ukraine.

The Ascot team were able to get shippers and ship owners covered and onboarded in weeks rather than months by developing a simplified process to buy insurance. They also partnered with Insurwave to connect the market to live risk exposure data and increase speed to cover through automation.

Lloyd’s played a critical part in the structuring of this vital initiative because our licensing system allowed multiple insurers to share the risk, while the London market brings together a unique group of large carriers with the depth of skills and appetite to take part in this type of high-risk facility.

McGill commented that “Lloyd’s have a strong regulatory and compliance team who are consistently on top of how we need to apply issues like sanctions, and this helped us to be confident that we were not going to walk into a sanctions or regulatory breach while putting this product together. Only in the London market could we have launched with such speed, and the recognized global brand of Lloyd’s meant that shipowners felt confident to use the facility from day one.”

An added factor for those buying the policy is the blue-chip record that Lloyd’s has for paying claims, which gives buyers security that they will be paid out 100% as expected in the event of a cargo loss.

McGill continued, “This was a pure London market initiative. The willingness to engage with a difficult risk and to consider it proactively comes from the structure and experience within the Lloyd’s and London company market. Nowhere else would we have been able to get this off the ground.”

All sides agreed that the humanitarian angle of the problem was also a factor in driving forward to make the facility work.

Over 100 ships, carrying more than 2.3 million tonnes of grain have now left the Ukraine*, saving many people from certain food shortages, and getting the World Food Program moving once again. It is believed that many cargo ship owners who were cautious of trading into and out of the region have begun to work these routes again because of the confidence that a globally recognized insurance policy gives them.

Everyone at Ascot, Marsh, Lloyd’s and from the following participants in the facility is proud of this example of how Lloyd’s can fulfil its purpose: sharing risk to create a braver world. 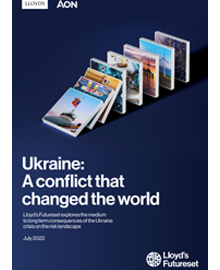 Ukraine: A conflict that changed the world

Over the past four months Lloyd's and Aon collaborated to publish two reports in response to the conflict in Ukraine. Ukraine: A conflict that changed the world.